Hercules Johnson
Las Vegas, Nev. — It’s shortly after 9 p.m. Monday when we pull into the Circus Circus parking garage. I’m three beers in and four shots to the wind, glad not to be driving. My girlfriend and I watched the football game at our bar a few blocks away and indulged in a goodly number of adult libations.

I figured that for a school assignment, it would likely be deemed inappropriate were I to get into a Raoul Duke state of mind, but I’ll be damned if I’m going to walk in Thompson’s footsteps sober.

We parked on the bottom floor of the abandoned lot, only steps from the door. “This place is dead as disco,” Chrystal said skeptically as I flicked the totally legal, doctor prescribed marijuana cigarette away from the car. “I mean, I know it’s a Monday,” said, “but really? This is depressing.”

She was right, there were few people to be seen as we walked through the glass doors into the lobby.

“Don’t worry,” I assured her confidently as I held the door like a damn gentleman. “It’ll be great, I just have to find the Carousel bar real fast, that and the American Dream.”

END_OF_DOCUMENT_TOKEN_TO_BE_REPLACED

Las Vegas, Nev. — Bingo is not exactly the hip gaming craze roiling the blood of the masses, not the masses under fifty at least. But the traveling circus that is Rebel Bingo is changing the game by infusing costumes, crazy prizes, competitive face-offs for prizes, sexed-up punked out girls talking dirty, and a liberal dose of liquor.

Rebel Bingo, which on July 18 hosted guests at LVH and the Boulevard Pool at the Cosmo, holds court at the Act nightclub inside the Palazzo Casino. Act earns its fame from the side show theatrics that it nightly injects into the standard local nightclub life, thus it appears the perfect environment to host this bombastic underworld party of Bingo and debauchery.

No one appears to blink as the costumed wanderer on stilts shimmies through the crowd surrounding the dance floor.

The show starts a little late but with much enthusiasm from the MC as he called the crowd to the stage. He introduces his troupe, lays down the rules, and the Bingo began.

END_OF_DOCUMENT_TOKEN_TO_BE_REPLACED 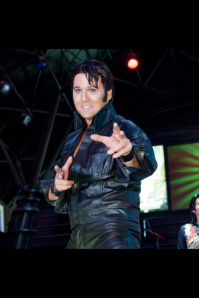 Las Vegas is a mecca for impersonators and tribute artists. Currently tourists can talented performers from around the country portraying many of their favorite artists, from the Rat Pack and Barbara Streisand to the Bee Gees Britney Spears and Michael Jackson. But no star of song or screen is mimicked as often and with such praise as the King, Elvis Presley.

Las Vegas’s love affair with Elvis has been documented and related through television specials on the man himself as well as in movies galore from the Flying Elvi shown in “Honeymoon in Vegas” to the plethora of impersonators used as the backdrop for “3000 Miles to Graceland.”

On May the 4th Annual Las Vegas Ultimate Elvis Tribute Artist Contest was held on Fremont Street in front of thousands of spectators. With twenty contestants performing over two days there were plenty of Elvi representing a number of infamous Elvis looks to choose from.

Over the course of two days these performers sang and shook their hips across the stage for the judges and the applauding crowd. But at the end of the day there was room for only one Elvis to grace the stage as Las Vegas ultimate Elvis impersonator, and that Elvis was Chad Collins.

Chad currently portrays Elvis at the Little White Wedding Chapel on Las Vegas Boulevard. Although this is his first time performing on stage as Elvis Chad is an old hand at the tribute artist game. He began his career as a performer, impersonating Tim McGraw and made his name performing the character for Legends in Concert throughout the first decade of 2000’s.

As the winner of the Las Vegas leg of the competition The contest serves as a preliminary round for the Ultimate Elvis Tribute Artist Contest which takes place in Memphis during Elvis Week. As the winner of this year’s preliminary round in Las Vegas, Collins will proceed to the semifinals during Elvis Week 2013 in Memphis, Tenn.

Since it was launched in 2013 the Ultimate Elvis contest has become a highlight of  Elvis Week in Memphis, which attracts more than 70,000 fans from across the globe.

Collins will be continuing his gig performing marriages as Elvis on the strip, he will also be seen this month in The Best of Vegas Summer Variety Show, where he will be performing as both Elvis and Tim McGraw in the same show for the first time. He can also be seen singing and playing guitar in his new band Easy 8’s, who recently performed on Fremont Street on the 4th of July.

Las Vegas is internationally famous for its bright and bustling Strip. The bright lights and the jumbo screens invite tourists and locals alike inside with the promise of endless parties and sex. Sweaty bodies in their tight shirts and tiny skirts await inside countless cliched nightclubs writhing to tunes spun by DJ’s, some famous across the world and others famous across the city.

Around the city numerous venues have tried for years to establish themselves as competitors in the city’s nightlife market. The vast majority of these places appear with a flash but most are gone as quick as lightening. In his article, “Does Las Vegas Have a Nightclub Bubble?” for Seven Magazine earlier this year, David G. Swartz suggested that such flops could be a problem that soon move from off strip attempts into the heart of Vegas’ nightlife scene itself, on Las Vegas Boulevard.

But not everyone is suffering from such failings. On the edge of the Arts district, just past the Naked City and about halfway between the main Strip and Fremont street, sits the Aruba Hotel. Nestled between two of the city’s most prominent quick hitch wedding chapels and across the street from one of its sleaziest fully nude strip clubs, the Aruba is what now remains of the formerly famous Hotel Thunderbird.

For much of the week the motel is as quiet as the rest of the neighborhood, far from the glitz and glamour of the party city’s hubs. But every Saturday night the Thunderbird Lounge and Club Aruba come alive as DJ Handgun spins the beats for the most continuously successful reggae event the city has seen over the last decade. According to Catherine Nguen, the event, Positive Vibrations’, head promoter, the weekly dance hall party consistently sees between four and five hundred patrons on a weekly basis, with a line frequently out the door.

“I’ve been playing reggae for twenty years,” says DJ Handgun, “I’ve been here at the Aruba Hotel since 2005 and weekly since 2006. Playing dancehall, roots and soca.” When asked how he has been able to keep his event so successful week after week, in an out of the way venue his answer was simple. “Me and my partner, DJ Charlo, we play the best music, we have the best vibes,” he answers. “It’s good people and good times, we draw them in from California, the Caribbean and even Africa … they keep coming back because we play what they are here to hear. No one else does.”

You can hear electronic dance music on almost any block almost anywhere you find crowds in Las Vegas. If you want to hear Reggae, you go the Aruba Hotel.