Las Vegas is a mecca for impersonators and tribute artists. Currently tourists can talented performers from around the country portraying many of their favorite artists, from the Rat Pack and Barbara Streisand to the Bee Gees Britney Spears and Michael Jackson. But no star of song or screen is mimicked as often and with such praise as the King, Elvis Presley.

Las Vegas’s love affair with Elvis has been documented and related through television specials on the man himself as well as in movies galore from the Flying Elvi shown in “Honeymoon in Vegas” to the plethora of impersonators used as the backdrop for “3000 Miles to Graceland.”

On May the 4th Annual Las Vegas Ultimate Elvis Tribute Artist Contest was held on Fremont Street in front of thousands of spectators. With twenty contestants performing over two days there were plenty of Elvi representing a number of infamous Elvis looks to choose from.

Over the course of two days these performers sang and shook their hips across the stage for the judges and the applauding crowd. But at the end of the day there was room for only one Elvis to grace the stage as Las Vegas ultimate Elvis impersonator, and that Elvis was Chad Collins. 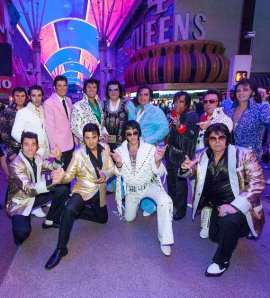 Chad currently portrays Elvis at the Little White Wedding Chapel on Las Vegas Boulevard. Although this is his first time performing on stage as Elvis Chad is an old hand at the tribute artist game. He began his career as a performer, impersonating Tim McGraw and made his name performing the character for Legends in Concert throughout the first decade of 2000’s.

As the winner of the Las Vegas leg of the competition The contest serves as a preliminary round for the Ultimate Elvis Tribute Artist Contest which takes place in Memphis during Elvis Week. As the winner of this year’s preliminary round in Las Vegas, Collins will proceed to the semifinals during Elvis Week 2013 in Memphis, Tenn.

Since it was launched in 2013 the Ultimate Elvis contest has become a highlight of  Elvis Week in Memphis, which attracts more than 70,000 fans from across the globe.

Collins will be continuing his gig performing marriages as Elvis on the strip, he will also be seen this month in The Best of Vegas Summer Variety Show, where he will be performing as both Elvis and Tim McGraw in the same show for the first time. He can also be seen singing and playing guitar in his new band Easy 8’s, who recently performed on Fremont Street on the 4th of July.