The greatest Star Trek movie of all time has got to be “The Wrath of Khan,” it is not only the most famous Star Trek film, it is one of the definitive films of the genre, with one of the most singular villains in all of film. 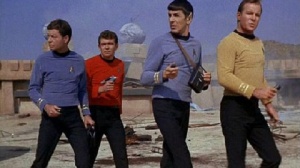 Khan is a bad dude who, on his own, brings the brass of the Enterprise to their knees.It is not a coincidence that the most recent installment, “Into Darkness,” reached to Ricardo Montalban for inspiration, they know that to raise the stakes, they needed a villain who could threaten Kirk and Spock with something more interesting than an armada, something more Machiavellian than mere mass murder.

That being said, maybe the 2009 reboot is actually the best Star Trek we’ve yet seen. Star Trek has seen film after film, and series after series, grab the hearts of sci-fi fans, but never has the Enterprise grabbed the public zeitgeist by the groin the way the Millennium Falcon and lightsabers have for almost forty straight years. The original series only lasted three seasons and, though later itinerations and the films have been ever present, it has never been on the same blockbuster level. It’s possible that the focus on statesmanship and intergalactic politics, while casting aside the high adrenaline dog fights and duels, was not only Star Trek’s most unique characteristic, but also its greatest weakness. END_OF_DOCUMENT_TOKEN_TO_BE_REPLACED 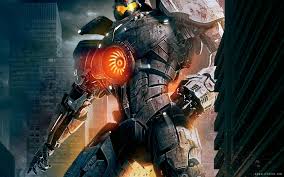 Holy Shit. That is all I can say. Pacific Rim is awesome. Easily the most fun movie of the year, and probably the most satisfying movie going experience I’ve had in a long time.Trying to decide if it tops Avengers and Dark Knight Rises, but I have trouble bringing myself to say that. To be fair though, I’m a huge comic book fan, and in the interest of full disclosure I will freely admit to praying at the alter of the Caped Crusader.

I’ve read a couple of reviews saying that characters are two dimensional or heartless and the acting is sub par, but that seems like big action hatering to me. The fact that the co-stars are giant robots and city crushing aliens, in no way detracts from the emotive content of the main characters. Our hero suffers significant loss in the opening scene, loss that is informs his character throughout the film. The central cast has heart, humor and attitude as well as the blessing of working alongside the always awesome Idras Elba.

And then there is the action, the bruising battles between those giant robots and the city crushing aliens. It’s clean and visually understandable, while still being fast, beautiful and huge; so much better than the mess of mechanics that are the battles in Transformers. The sets are cool and look authentic, characters unto themselves. Guillermo del Toro is at his best creating immersive worlds full of details and idiosyncrasies that give life on the silver screen depth and personality.

In Pacific Rim, del Toro accomplishes all of that and more. He brings to life an engrossing battle for the end of the world with charismatic characters fighting monsters, fear and each other. An underground black market, dealing in the monster’s remains, offers the civilian view of the Earth shaking crisis, and a walk around the war torn city.

Pacific Rim is a huge mind blowing good time. And it is original. Sure it’s inspiration can be seen in Anime and other Asian imports form Voltron to Evangelion. But this is an original story with original characters and something most Americans, not indoctrinated into the world of men piloting giant robots, have never glimpsed before. And it is awesome. Go see Pacific Rim, so we can rave about it later. 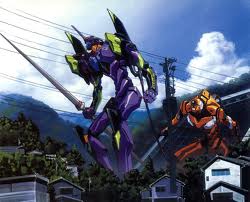 I love movies. I try and get out to the films that are lauded by the critics and cinephiles while bringing in the Oscar nominations. Lord knows I love action packed blockbusters. Growing up a comic fan and Sci-Fi fantasy fan, I’ve been in with the new pop culture obsession with these movies that have come to dominate our summers. Even when they are flawed, I can almost always find redeeming qualities to focus on and enjoy myself.

I wouldn’t say that I had real high expectations for The Lone Ranger, but  I dig westerns, I dig Johnny Depp and many of his eccentric characters and I have no idea who Armie Hammer is. So, I was in expecting it to be fun at the very least. But it was not.

It was long, very long and it was awkward, kind of racist and full of death in an oddly unsettling way. I mean there are scores of Native Americans  massacred and its treated like a weightless sidebar, as its juxtaposed with a pratfallish escape scene. I don’t know if I found it so disturbing because of the context free, emotionless killings or because it was in a movie marketed to children and their families.

Also, I get the impression that no one found this at all racist. Johnny Depp was one of the better parts of the film, and they did attempt to explain away the broken English he speaks … but still. Twenty years after Dances with Wolves and Last of the Mohicans drew great attention for starring actual Native Americans in their portrayals, we couldn’t find a single talent to play this starring role? We had to revert to a white dude in red f … er, white face? If not racist, it’s certainly disappointing.

And who the hell is Armie Hammer and why is someone trying to convince me he is a movie star? I do not believe it and I am not alone. He has very little charisma, poor comic timing and does nothing to carry this movie. In a movie full of explosions and reckless mayhem I would have expected to prefer the character who dislikes guns and vigilantism, but no. He seems heartless and tongue in cheek in a non self-aware way that is totally out of place in a movie where everyone else attempts to act like their in a modern movie.

I thought Battleship was bad, I was right, but this floptacular bastard at least had a chance before it derailed into an offensive, inexplicably boring failure.

Las Vegas is Hotter than Hell. Residents of the city may not be surprised to hear this, especially in the midst of this debilitating heat wave that has been encompassing the Southwest the past few weeks. But according to Steven Slivka‘s article for the Las Vegas Review Journal, “Las Vegas’ hottest June ends with a 117-degree high, tying the record,” not only did the final day of June tie the record for the hottest day on record (followed by a night featuring temperatures as high as 111-degrees), but the month set a new record for hottest June in the city’s history.

People have suffered injuries already and the city is reminding people to stay inside, keep water around and stay hydrated. The city is also pushing their plethora of cooling stations, which offer everyone from the families to the homeless a chance to cool off and get wet in the water, as Riley Snyder covers in his article “Cooling Stations Help Those out and about Around the Valley Beat the Heat,” earlier this month in the Las Vegas Sun.

For many people however, even splashing around in the water may not be quite enough to alleviate the soul crushing sun’s rays. Such citizens are in luck as a handful of the valley’s movie theaters are making it easier than ever to hide from the heat for a couple hours at a time.

On the strip AMC theaters at Town Square, formerly Rave, offer $5 movies every weekday before noon as well as normal matinees after.

Most theaters have matinees every weekday where patrons can get tickets for a few dollars off the standard price, but there a couple places where movie goers can get even better values. Regal Cinemas’ locations at Green Valley Ranch and the Colonade on South Eastern both feature $6 Tuesdays for all movies not shown in 3-D or I-Max. The two theaters also offer significant discounts on those special screenings as well.

Across town at the Brendan Theaters inside the Palms Casino, there are variety of deals as customers can enjoy $5 movie Mondays or the 2 for $22 Tuesdays special, which features two tickets, two popcorns and two sodas.

Of course there is no better value offered on a daily basis than Tropicana Cinemas. Located at the corner of Tropicana and Pecos, the renovated second run theatre shows movies that have recently left most theaters, but have yet to hit DVD on digital big-screens for only $1.50 per a ticket. There patrons get one last chance to catch a flick they may have missed before they are forced to watch on a smaller T.V. screen, or the chance to catch a favorite one more time at a fraction of the price. They even have $1 hot dogs. What more can a moviegoer ask for?