Brooklyn is a prostitute who frequents the bars in the downtown scene on a regular basis, always with a different man on her arm. She is young and brunette, speaks with a distinct New York accent and generally has a smile on her face. But she did not feel comfortable giving an interview. She wasn’t sure her man would like it and she wasn’t sure she’d be comfortable being quoted. So she pointed the way to her pimp “Downtown Brown.”

I met Brown at his condo Friday afternoon. Tall, skinny and muscular at age 37, he met me at the door in a pair of slacks, a tank top undershirt and a do-rag on his head. He welcomed me, told me that Brooklyn had said I was nice and he’d be happy to talk to me for a while. On the counter stacks of twenties stand beside a toaster and a pile of cocaine. We sat across from one another at his kitchen table and talked: first, for a few minutes, about my bar and how long I’d been bartending, before moving into my time at UNLV and his time at college at Fresno State.

Brown came from Minneapolis Minnesota and spent some time in Georgia as well. He went to college in Fresno on a basketball scholarship. He was successful and enjoyed it but in school he was injured and did not garner enough attention to get drafted to the NBA. Instead Brown pursued his dream in the less fashionable way, playing briefly in Japan, before joining the Las Vegas Rattlers, now known as the Aces, of the American Basketball Association.

It was a way to live his dream, but the pay was not good and he lived in a city that whose nightlife demanded attention and a better paycheck. Growing up hustling had always been around Brown’s life. His uncle Billy lived down the block and had been pimping as long as he could remember. His cousin across the street was known as the Prince of Darkness.

“Black as hell but always shining and walking around with three or four beautiful as white women,” Brown said. “Moms always tried to keep the life out of view by keeping my brother and me in sports. I mean I played everything, you name it: baseball, hockey, football, golf, she had us swimming. She tried her best to keep it all from us. But it was everywhere.”

Brown first got into the game in 1996, dabbling and only working with a girl or two, trying to keep his focus on basketball. But the Rattlers only paid him $200 a game. His girls were bringing home $5,000 a night each on a regular basis.

“The money was too good famo, and the life is like a drug,” Brown said. “It’s a different kind of high. Waking up in bed with six naked ladies man, you can’t help but feel good and excited. You walk into a club with five sexy bitches on your arm, everybody’s starring at you wanting what you got, but they can’t touch it unless you feel like lettin’ a dude. I’m saying it’s a high. Once you start experiencing you can’t drop it, you want it more and love it every day. And $200 a couple times a week aint going to cut it.”

So soon enough Brown got into it full time and expanded his stable to six or seven girls. They would go to work in the evening and in the morning they would bring him a few thousand dollars. And for his money, he would be their everything. 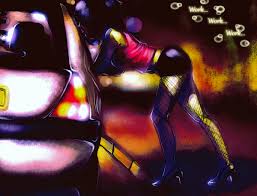 “Ya’ll in this together you dig,” Brown said. “Society looks down on us, they families usually look down on them, might disown them. We all we got. I aint saying it’s love, but there’s feelings, there’s caring you know. It’s a relationship. It aint the one everybody’s used to, but it’s honest. We lay that shit out 100% at the beginning. No time for no bull shit.”

When asked if he treats his girls kindly or if he gets violent with them Brown rolls his eyes. “Man, there’s some dudes in the game, new cats usually, just out of bangin’ or something, that are all gorilla about it. But that aint good business. I’m not saying I’ve never hit a bitch, sometimes she start shoving or slapping or screaming in your face and shit happens. Like my grandma said, ‘there’s a time and a place everybody needs to get hit in the mouth.’ But that aint how I do things.”

“They in this by choice,” he continues. “They don’t like it they should get out. ‘If you aint interested there’s another girl somewhere around here who is.’ I never force anything. They don’t act right, I’ll just stop talking to them for a while. They’ll come back and make it right, or try someone else, find out I’m not so bad, and come back to make it right then.”

Brown has very little regrets. He wishes he had pursued his basketball dream harder, tried to give it his all and avoided the temptations and distractions. But the life is good. He’s had comfort and more money than he knew what to do with. He’s spent years in Hawaii, fell in love with a girl who stayed his number one for ten years. It’s taken him out of the country to Trinidad, Brazil, Jamaica and Venezuela.

“It’s shown me a lot of shit I wouldn’t have seen,” he said. “I don’t regret much at all. I guess I wish I had some number of some of the girls I had back in the day. I was a prick sometimes man. Young, loud and stupid. It was my way or the highway man, and that don’t lead to good shit very often. I’d like to call some of my old ladies, let ‘em know I wasn’t perfect and I’m sorry for the way I acted sometimes.”