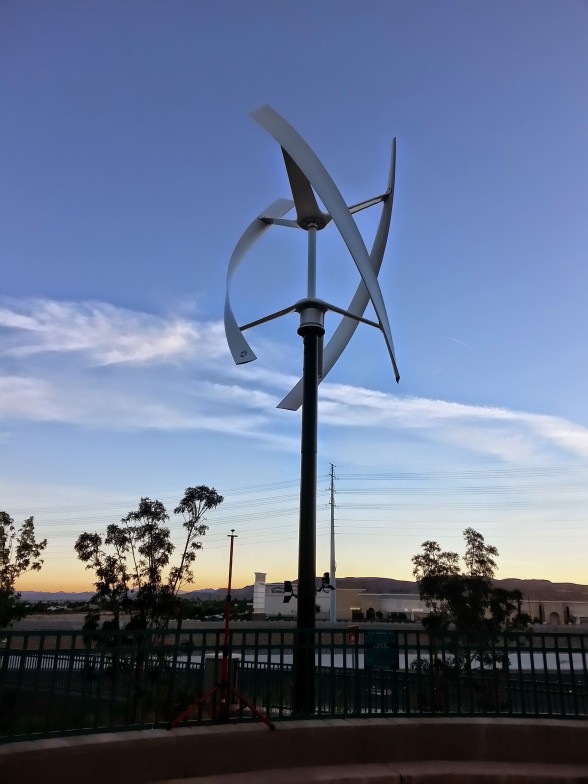 Las Vegas has more green buildings per capita than any city in the United States, with the only close competitor being Washington, D.C., where sustainability minded laws and regulations are more prevalent than anywhere else in the country.

Las Vegas has taken the lead in the realm of private innovation, with the Strip’s Casinos and the all new Downtown taking center stage. Yet, in the face of billion dollar projects and world renowned enterprises, according to LVC tour guide Aaron Barborka, the first net-zero-energy and LEED Platinum Certified building in the country, is the Las Vegas Cyclery (LVC).

No other property in the city, and apparently in the country, has so adhered to the “Triple Bottom Line” philosophy of “People, Planet, Profits,” perhaps even prioritizing profits below the “people and places” aspects.

The Las Vegas Cyclery has tied their success tighter with the environmental mindset than most could imagine. The designers covered their alternative transportation concerns by selecting a location adjacent to a bus stop, prioritizing parking for carpoolers, and sustainable vehicles, even installing an electric-car charging station.

Within their store is a recycling center, where used bicycles, shoes and various used goods are offered to the community for reuse, before they are recycled.

The final categories in the LEED rating system is for innovation, and regional priority, and the Cyclery has made itself a prime example of outside the box thinking. The site features a bike trail, a bike wash and a tour center, all designed to encourage riders to maintain, and even ramp up, their eco-friendly mode of transportation. The building also features a 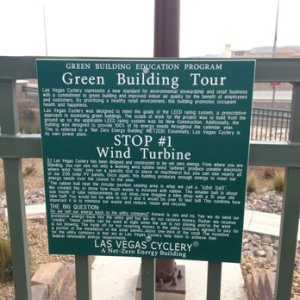 tour, highlighting the green innovations and sustainable practices that separate the Cyclery from commonl retail spaces.

The building is, at its best, an inspiration, using low flow fixtures and waterless urinals, LED lights, daylighting and solar tubes, water reclamation and renewable energy. The site even has an on premises biking trail.

The building uses wind to power their on-site turbine and the sun to convert the business into a miniature power plant. With 208 solar panels and a 40′ wind turbine, the building is a power plant, producing over 100% of the power it uses in a year. Using credits that it earns in lieu of compensation from NV Energy, the Cyclery avoids power bills altogether and earns the power company tax relief as a clean energy provider.

According to Mr. Barborka, with the solar array covering the cost of

$1,200 to $1,500 per a month in electricity and expected to last 30 years, the final ten years of the system’s lifespan will be all profit, paying for itself before the end of the first 20.  The building utilizes super-efficient LED bulbs and outside the plants are native, and adaptive, requiring minimal water.

The Las Vegas Cyclery is the ultimate achievement in green design, saving tens of thousands of dollars from the bottom line each year, providing clean, sustainable energy and serving as a leader of innovation, the epitome of the triple bottom line.